If you’re looking for an easy weeknight dinner or a unique Thanksgiving/Friendsgiving dish to bring, look no further than my tasty Chicken Tetrazzini!

Chicken Tetrazzini (and we do not call it Chicken Spaghetti here, that’s something completely different!) is a creamy, cheesy pasta bake. The main stars are juicy shredded chicken thighs, sauteed mushrooms, and spicy Rotel tomatoes. Spaghetti noodles get doused in a homemade cream sauce, and everything is baked in the oven for about 20 minutes. This dish is simply divine!

A few things here: You can shortcut the recipe by using shredded chicken from a rotisserie chicken, etc. But this is one of the few times I say to take the longer route! My recipe cooks the mushrooms and creates the sauce in the same pot as the chicken; so you use the tasty bits from the meat to get a much better depth of flavor.

Also, the reason that we cook the noodles first is to allow them to cool down before adding the sauce. When noodles are hot, they swell in the oven and absorb everything that touches them (aka our cream sauce!) By using cooled noodles, we avoid a dry pasta bake – and no one likes that.

Don’t be afraid of the “hot” Rotel tomatoes – your mouth won’t be on fire, I promise! I also wrote the recipe so you can taste your sauce and adjust the seasonings before adding in the chicken (since we slightly undercooked the chicken before it finishes in the oven.)

This recipe makes for plenty of leftovers, but I’m sure you’ll have people going back for seconds (my boyfriend actually went back for a 3rd plate, no joke!) Let me know in the comments if you’ve ever had Chicken Tetrazzini, and if so, what do you call it in your neck of the woods? 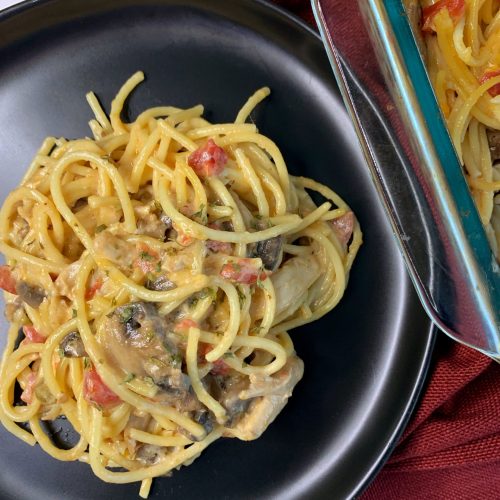